Yesterday’s announcement of Apple launching it’s Safari web browser for the window platform was a bit puzzling and I wasn’t sure of what to make of it at first. So I decided to read more about it and then install it.

Of course, day one is always amusing. First, it’s clear that the security claims are not fully justified. And moving from the confines of the OSX world, which is generally like a meticulously cleaned up suburban neighborhood into the wilds known as the world of Windows was bound to test some of Apple’s mettle when it comes to security. But that’s really besides the point: the software is not a full released version and one can hope that it will be improved upon further down the line (then again, hope springs eternal.)

But all this is really besides the point. In order to see what is happening, one must start thinking about why would Apple think about a new browser today.

The first popular line is that it works as a good environment for developing applications for the iPhone, now that Steve Jobs has stated that this would be the only way developers can currently develop for that new device. GigaOm believes that AJAX will change the way mobile devices applications are developed. I’m not sure I share Om’s enthusiasm for that approach: for starters, the system sports WiFi and EDGE but no higher speed wireless network. So, unless you’re near a WiFi hotspot (and I’m sure one was available for Steve Jobs’ presentation), you may find responsiveness sluggish. Small amounts of data are OK when running on an EDGE network but the startup for a new AJAX-powered application will probably be on the slower side. However, having denied access to the core system on the iPhone to developers (as it did for the iPod), Apple had to toss them a bone and Safari was that bone. That bone is called Safari.

The next challenge for Apple was that, while a lot of developers use OSX, the majority of development is still not happening on their platform. In fact, more energy is expanded in the web development community to making sure that something works with the Firefox browser than is to make sure that it works with the Safari browser. By now swinging the tantalizing carrot of iPhone coolness, Apple is making sure that more developers ensure their sites work with Safari. From that sense, it avoids future problems with some of their mac users being unhappy with the fact that some sites don’t work on Safari, blaming Apple for it instead of the site’s developers, and it creates a new platform for itself: develop something on Safari and it will run on macs, windows, and the iPhone.

Apple is basically pushing Safari as a new platform, borrowing a strategy that was first highlighted by Marc Andreesen almost 15 years ago: back in the day, Marc stated that he wanted Netscape to replace windows or just turn it into a set of basic components with everything running into the browser. Of course, this was at a time when you were lucky if you had a 56k modem so it didn’t make much sense then. In a world where bandwidth is high enough, applications can now resides largely on the network so Apple pushing Safari as a new platform could make some degree of sense.

The next step to think of is that while an application may make sense in terms of running fully online, even Google has seen some of the limitations of that model. Their offering of the Google Gears showed that they are interested in moving some of their application to an environment where a network connection is not required 100 percent of the time.

So Apple’s strategy would require a way for Apple to ensure that things can be installed locally within Windows. This is where something that was not mentioned by the folks at Apple is showing up when you install Safari: 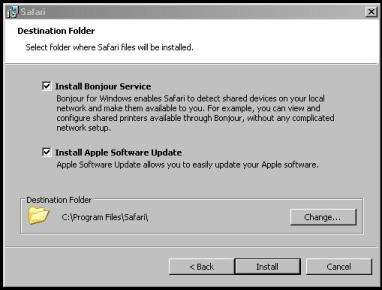 Now that’s very interesting. Why would Apple be so interested in installing those two pieces of software on your computer? After all, they are not necessary for developing applications for the iPhone. But before going into speculations as to why they are there, let me explain what those two applications do:

The presence of those two packages higlights that Apple is not just interested in the desktop but wants to play within a wider environment:

One can assume that Bonjour might be embedded in the iPhone and AppleTV as well as future version of the iPod. This would basically hit right at the heart of Microsoft’s strategy of creating a distributed environment where the Xbox, Windows Media Center, and other Windows powered devices are all interconnected. Apple would now enter that world and get all their stuff also connected on Microsoft’s turf.

The presence of software update, while not fully mined yet, could be equivalent to Google Pack, which also happens to include the Google Updater, which Google describes as follows:

With that in place, the windows desktop is increasingly looking as a new battleground. On one site you’ve got the incumbent, with Windows Update, then you have the new claimants to the throne in the form of Google and Apple. Right now, Apple is actually starting to push new products with the Apple Software Update: installing the new Safari software on a virgin machine (ie. one without any Apple software update) yielded the following Software Update Window: 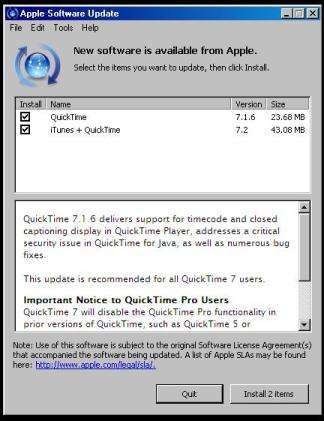 So I install a browser and the next thing Apple is telling me is that I should really consider installing iTunes and Quicktime. What next? This is obviously a good delivery vehicle for Apple to push more software down the lines.

So they’re developing their own eco-system right on top of Windows. In a way, one could think that they are basically taking the same approach as Microsoft did with the Office platform: Develop on someone else’s turf but also optimize for your own.

It’s a brilliant strategic move and one that could eventually yield to much more software coming from Apple to the Windows platform.

So why would Apple care about Windows?

Well, beyond the basic point that there are more Windows users than there are mac users is the fact that Apple is working on setting up new ecosystems for itself. The iPod was the first obvious move in that direction and they are betting that the iPhone will be a similar winner for them. Earlier this year, when Steve Jobs introduced the iPhone, he also dropped the word computer from the name of the company. Apple’s future is not in the computer space (and it is appears the company is running out of new ideas for its operating system as the new OS features presented in yesterday’s keynote were incremental at best) but in the consumer electronics space. They hope to control what’s in your hands (iPod, iPhone), what’s on your screen (iTV, iTunes) and how you access the content. By having control to the access point, Apple can then influence the pricing models in the delivery of media and ensure they take their own percentage along the way: it’s something that worked for them in the music space, something they’re working on in the video space, and I suspect something they’ll eventually look into in the software space.

Apple wants to control the points of entry and charge a fee for access to them (further highlighting that point is this blog entry by Larry Dignan at ZDnet, which highlights that Apple is getting some nice revenue from Google and Yahoo). All and all, Apple could eventually succeed on grounds that Microsoft once wanted to claim as its own: to become the tollbooth to the Internet and the new world of media.