A product long rumored and whose very existence was long denied by Google itself finally launched: the Google browser, aka. Google Chrome. There are a number of things that are good and a few that leaves one scratching his head but ultimately, it is very clear that Google is working very hard to ensure that it can keep tight control of the ground its gained and fend off potential threats by the likes of Microsoft.

Google lives on the web. Most of its application need a web layer in order to operate and, if it were to find itself in a position where the access to their application where to be compromised through the equivalent of a strategic man in the middle type of attack, their business would die off. So, if Microsoft, which currently still controls around 70 percent of the web browser market, were to decided to change their code to impact how Google applications function, Google would be in deep deep trouble.

Because Google realizes that the browser is sort of their achilles heel, they had to make a play into that space. The first thing they did was help the creation of an alternate offerings, by giving large subsidies to Microsoft competitors like Apple and the Mozilla foundation, largely dolled out as revenue for traffic generation through the search box. See, one of the thing not too many consumers are told about is that the search box in Safari or in Firefox are actually paid placements: Every time a user uses that box to perform a search, a little bit of revenue goes back to the browser creator. So that’s great because it allows those alternative browsers to develop and, as long as Google is people’s preferred choice anyways, no one is complaining.

Of course, there are certain issues with the arrangement: a lot of the people who have installed Safari or Firefox don’t like online ads and some developers were happy to provide tools allowing those users to remove ads from web pages. Google wasn’t too thrilled about that but it found the issue mostly OK as long as the arrangement didn’t hurt its advertising cash cow too much.

But over time, this model created a problem. The feature was tested by consumers who, having seen too much of their screen real estate polluted by ever larger ads, liked what they saw. And, as ads became smarter and started to target users individually, it spooked consumers. Being able to block certain ads became a product differentiator and started to cause some problems to Microsoft.

So, with IE8, Microsoft is starting to claim that it will help users and one of the trial baloons it has been floating is that the user may have more control over what ads they can see and possibly may be able to block some ads.

For Google, that’s not too happy a development: the idea of being able to provide free products is based on the fact that Google is really and advertising company with a side business in search. And if the advertising is blocked, then Google’s whole business model falls apart.

So now, Google needs to regain some level of control. For many years, it’s been going after bits and pieces of the Microsoft empire: a little bit of the office suite over here (Google Apps), a little bit of the enterprise space this way (Google Appliances), a little extra screen real estate (Google Widgets), an alternate application distribution network (Google Pack)… but the premise behind most of their offerings was that life was now in the “network cloud” (basically recalling Scott McNealy’s old “The Network is the Computer” concept with 2.0 flavor).

With Chrome, Google is now trying to bypass most of Windows. There’s still a few things that Windows will be allowed to do for now (connecting to the Internet, managing the communication layer) but it seems that this is the farthest Google has gone into addressing Microsoft head on. In the mid-1990s, Marc Andreesen, then at Netscape, said he wanted to relegate Windows to being just a set of basic libraries and, with this offering, Â Google is trying very hard to do so though I am sure you’ll never hear them say so.

Will it work? I don’t know. At first glance, I’d say that their challenge will be to get the software installed on a lot of machine. For all their past efforts, it looks like it may take a while. Once they have gotten Google Chrome installed, the next thing will be to move up to a default setting. That will be another challenge.

What I suspect is that the company will soon offer a customizable version to cable and phone companies to ensure that they choose Chrome over Internet Explorer. And one thing I’m pretty sure about is that whatever happens, Google will ensure that ad blocking software will not work on Chrome.

One of the things that leaves me scratching my head is whether the memory management Google claims as an important piece of its offering is actually based more on marketing messages than reality. Buried in the developer’s menu is an item that supposedly offers a view into the memory and CPU usage of Google’s new browser. Yes, the browser feels fast so it’s clear that there are a number of improvements there but what is that costing in terms of memory. Here’s what the browser reports: 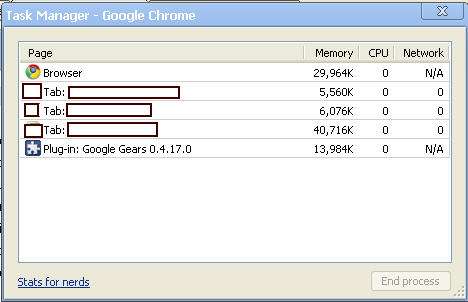 What you’re seeing here is the browser running two plain HTML pages and an instance of a richer web-based application (Google Reader, which, according to this, accounts for 40Mb of memory space used). Where I get a little puzzled is when I looked at what Microsoft reported through its task manager:

The same 5 processes appear (but since Windows only knows them as running as chrome, it can’t identifty which is which but the numbers are very different: Chrome reports an aggregate memory use of 96,300K while Windows reports an aggregate memory use of 121,544K or 25,244K more. To be very honest, I don’t know which number is correct but, with only 3 tabs open (and the tabs I have on here are the minimum I have open at any time), I don’t find it very reassuring to see this type of gap appear. Will it get worse as I add more tab? I don’t know but it’s something worth investigating.